Stan and Charmaine, a young urban couple, have been hit by job loss and bankruptcy in the midst of nationwide economic collapse. Forced to live in their third-hand Honda, where they are vulnerable to roving gangs, they think the gated community of Consilience may be the answer to their prayers. If they sign a life contract, they'll get a job and a lovely house... for six months out of the year. On alternating months, residents must leave their homes and serve as inmates in the Positron prison system. At first, this seems worth it: they will have a roof over their heads and food on the table. But when a series of troubling events unfolds, Positron begins to look less like a prayer answered and more like a chilling prophecy fulfilled. 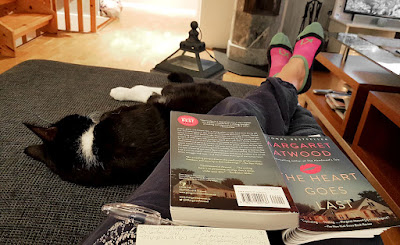 Stan is trimming the hedge, making an effort to appear not only useful but also cheerful. The hedge doesn't need trimming - it's the first of January, it's winter, despite the lack of snow - but he finds the activity calming for the same reason nail biting is calming: it's repetitive, it imitates meaningful activity, and it's violent. the hedge trimmer emits an menacing whine, like a wasp's nest. The sound gives him an illusion of power that dulls his sense of panic. Panic of a rat in a cage, with ample food and drink and even sex, though with no way out and the suspicion that it's part of an experiment that is sure to be painful.
s. 113